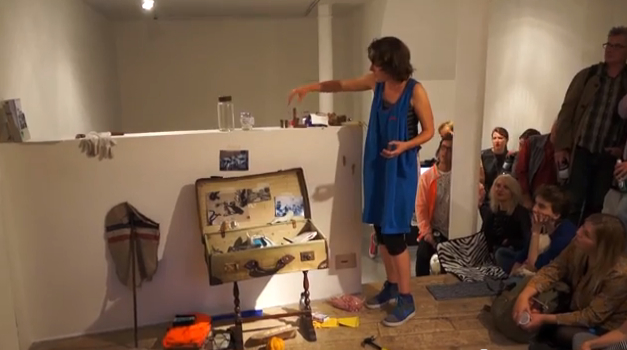 Props is an evolving talk that I have been performing for the last few years. Most recently I headlined the literary stage with it at Latitude Festival (2014) as part of a comedy show with Robin Ince, Josie Long, Joanna Neary and Charlotte Young.  The piece involves me rummaging through a box/pile of objects and artefacts which correspond to actions I have carried out during my urban walks.  I pull objects from the box and tell the audience about each of them (sometimes accompanied by close-ups on the projector). They chronicle humorously subversive attempts to change the world through small gestures and interventions, which relate to political and philosophical ideas. Each time I perform Props it changes, and new stories are added. See below for images and sample script. 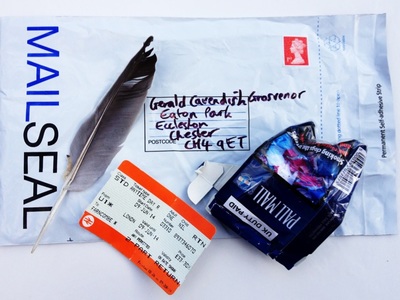 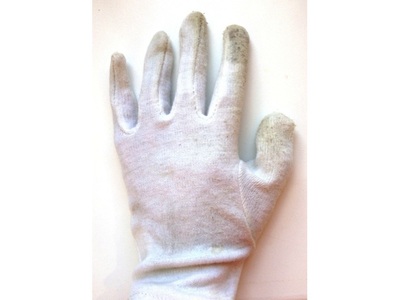 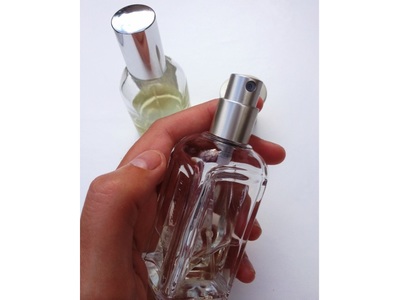 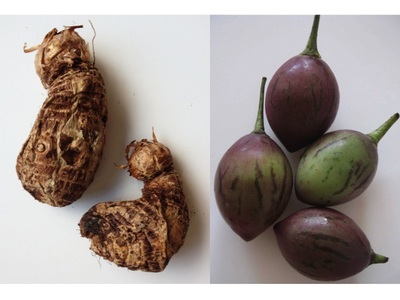 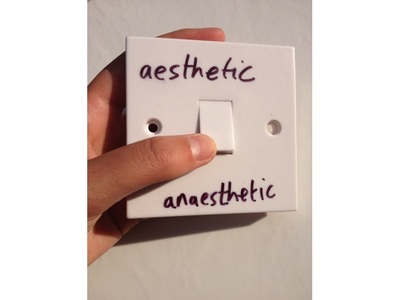 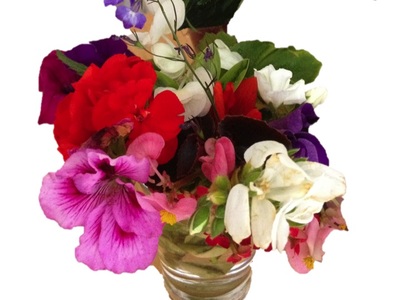 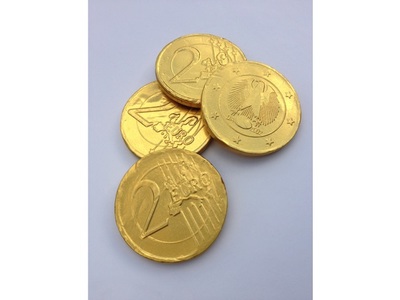 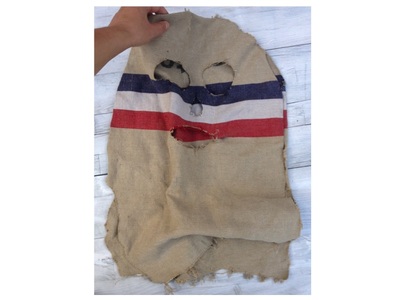 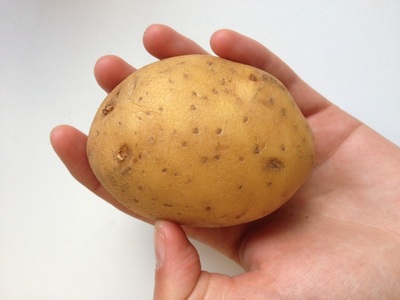 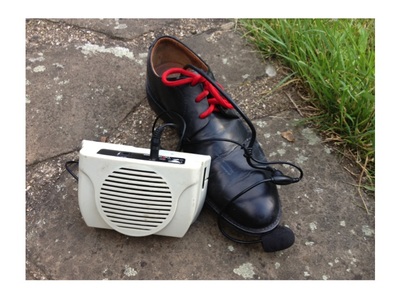 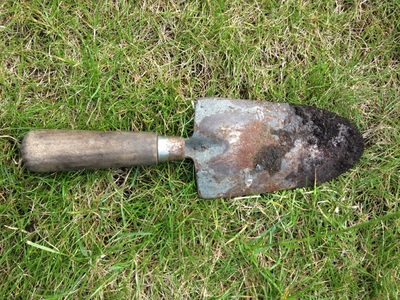 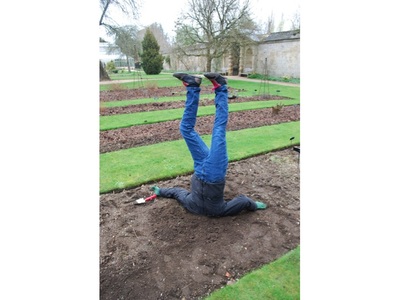 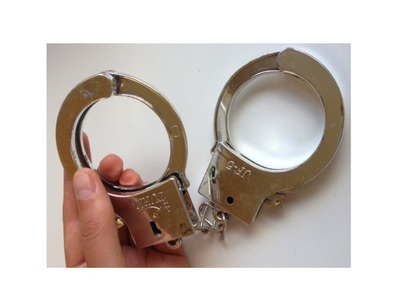 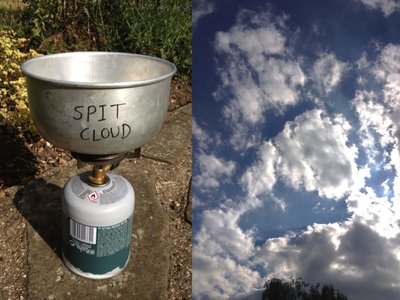 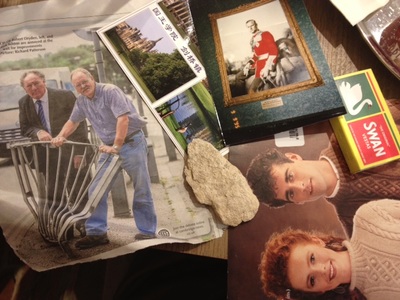 I smuggle foreign vegetables into shops that don’t sell them, like Tesco Metro or Sainsbury’s Local. I buy them at African and Asian stalls in Ridley Road and Deptford Market.  I sneak them into the supermarket and try to buy them along with the rest of my shopping. It throws the place into chaos because the person on the till can’t categorise the vegetable so doesn’t know what to scan it through as. I like the idea of using the system against itself; just adding something to it, on their terms. Friends I've told say that it’s not fair to target frontline staff - to disrupt their working day - but for me it’s more like an opportunity to have a meaningful chat with them and free them up from the robotics of till work to discuss nature and the taxonomy of things. It’s a philosophical interlude in their day and it brings everyone together. The cashier asks their neighbouring colleague what the strange vegetable is called (so they can beep it through) but they don’t know, and then other people in the queue often get involved until higher members of staff are called.  I like the fact that you get to see the behind-the-scenes hierarchies of the supermarket. Where did the vegetable come from? Is it a new product? How did it get there and what should be done about it? Sometimes someone is familiar with the vegetable if they’re from the part of the world that it comes from. In Marks and Spencer you go all the way to the top – I’ve met the store manager of several branches. It's the opposite of stealing - I usually end up paying for something that I already own; donating money to the corporation.

I make anti-crowd devices. Apparatus that will impede the formation of crowds and help me to regain my individuality. For example, I have made a series of belts with three foot long sticks extending from them, which is the ‘personal space’ zone, so that it creates a barrier and people can’t get close to you. I wear the belts on the tube at rush hour or at busy events in Trafalgar Square. A way to retain individuality in a world in which individuality is fetishized but in which as an individual you seem to have less and less and less power. The problem with the anti-crowd belts is that they usually get crushed very quickly, so they don’t really work. I’ve found a much better way of doing it though, I started wearing a mask that I had made out of an old postal sack and I found that it was a great crowd deterrent, people tended to stay an average of four foot away from me when I was wearing it on the tube.

For years I have been spraying stone statues around London with perfume so that they gradually become imbued with scent. Every time I walk past a statue I spray it. I carry the fragrances around with me in my bag at all times. I like to choose feminine scents if I want to challenge the patriarchal feel of the statues and introduce a bit more of a girly side to the stone philanthropist or politician. It’s a way of humanizing them.

This is one of a the shoes I made with an aerobics microphone attached to it. The speakers are strapped to the knee and the microphone to the front of the sole, so that as I walk, each footstep is amplified to the volume of a giant. It helps me to feel bigger, slightly more significant than just one in seven billion.

I’m not sure that this worked, but recently I was thinking about how people say I have my head in the clouds and I though it’d be a satisfying to literally have my head in the clouds, so I lit up a camping stove and spat into the hot pan for the duration of the gas canister and the spit immediately sizzled and evaporated into the air. Over the course of several hours a head-like circular cloud appeared that looked quite familiar and which I hope was formed out of my evaporated spit.

These are chocolate coins that I leave in the holes in the road that are dug for roadwork repairs. I partially hide them in the rubble so that as workmen dig they uncover them and momentarily get the joy of having found buried treasure.

I handcuff myself to strangers in the street, spontaneously, without permission, as a way of getting to know new people. Sometimes London feels so impersonal. Hitchcock use to make his actors do this to get closer to one another.

I carry this switch around with me most of the time. It helps me to be more aware of the visual qualities of the world around me; to look closer at things. When the switch is on, it heightens my aesthetic experience. It’s just a placebo, but it works.

Pointing is the new photography. My friend Claire is a photographer and she lent me some white gloves that she uses to handle delicate photographs. I was borrowing them to dress up as a mime artist for a fancy dress party. The connection between mime and photography made me realize that photography is just pointing at things, saying ‘look at that’. I realized that actually pointing is even more powerful; you can completely intensify and change a situation just by pointing – pointing directly at a fellow commuter creates a dramatic, tense situation. I have this hobby, I like to go to Canary Wharf and stand at the bottom of the tallest tower, One Canada Square, for many hours until I am stopped by security. It’s strange, because the tower wants to dominate the skyline; it wants to be seen, but when you point it out close-up the security staff seem to think it makes the building vulnerable. It’s a contradiction. Similar to the fact that the less transparent the financial industries get, the more prolific glass architecture is in financial districts; and that fact that when you get close up the glass is in fact very opaque; it’s a hall of mirrors.

This is another vegetable action that I do a lot. I buy a potato in the supermarket, then I carry it around with me for a few days and take it for walks, and take it to cultural events and lectures that I am going to – imbuing it with art and culture, and then I smuggle it back into the supermarket so that someone else can buy it and eat it for their dinner, completely unaware that it has experienced so much.

I became interested in who owns the land. A lot of London is still owned by a few aristocratic families. I often walk through Mayfair and I found out that it’s owned by the Duke of Westminster, his name is Gerald Cavendish Grosvenor and he lives in Cheshire. I realized that, to him, his land is just an asset on an excel spreadsheet; he is not lucky enough to experience it most days like I do. He doesn’t get to see the real place; the dirt, the clutter, the stuff that goes on there. So I found out his address and I have been posting him samples of things gleaned from the Mayfair street. I don’t write to him – I don’t want him to think I am trying to suck up, he probably has lots of people after his money. I just think that it will give him a different perspective. This sample has a discarded pall mall cigarette box, a train ticket and a feather; sometimes I just post dust or soil. I like to think that he enjoys receiving them.

This is a bouquet of flowers I made by picking one flower from each of the corporate flower displays outside shops, offices and banks in central London. Companies often use flower displays as a kind of marketing, to make the building look good and to attract attention. I sometime do this in Mayfair, I like to think that the bouquet is a present from the Duke of Westminster, in return for me posting him samples of the ground he owns. It’s kind of like Robin Hood, stealing from the rich and then giving to the poor; except that I’m just stealing from the rich and giving to myself I suppose.

WEARING THE EARTH AS A MASK

Sometimes I feel like it’s impossible to make an impact on the world, because it is so big and I feel insignificant. Whenever I feel like that I dig a hole in the ground with a spade or trowel and I put my head in the hole as though putting on the whole Earth as a gigantic mask; the globe replaces my head. It makes me feel very powerful to be wearing the entire planet in this way.