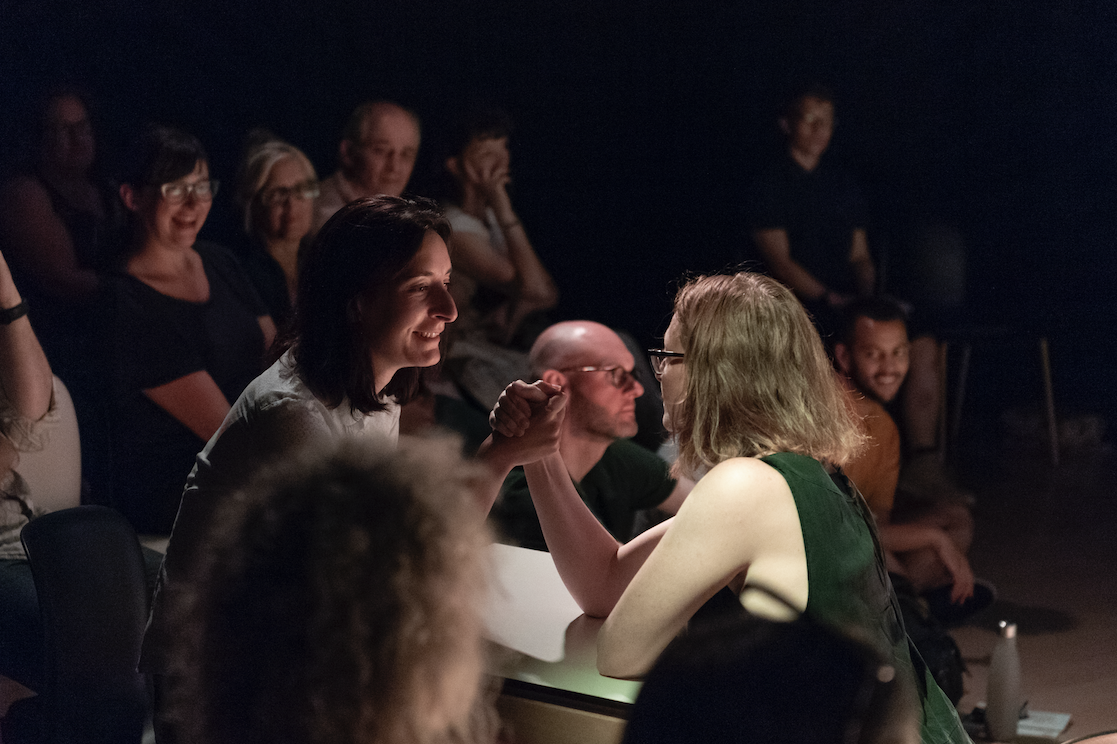 You're the HD to my ADHD (2018). Spoken word piece about my experiences as a care worker, commissioned by osbornmoller for Wellcome Collection event Handle With Care, July 2018.  As part of the performance the audience arm wrestled one another.

You run off the school bus, into the kitchen and steal as many mouthfuls from the jar as you can - Massive grin full of saccharine iron filings bristling on dentine – you’re bouncing, and beatboxing, smirking at 140bpm like a hyena plugged into a Roland TR 808. Put it down! Put the sugar down! You’re the HD to my ADHD. Non verbal but you can dance. Skinny elastic limbs flying – taller than me – teenage body stretched to growth spurt. Wrong aspect ratio. Put the sugar down! Put, put put the sugar down – I unwillingly provide the jabbering vocal loop you need for this live trap track; bass-rolling subsonic boom. It’s not the stolen sugar that’s giving you a dopamine hit, it’s the rhythm of this ritual, flapping Adidas wings at me and spitting sugar-grain pixels like an 8-bit Hitchcock video game cover; soundtracked by an increasingly exasperated chorus of - put the jar down! Strobing neon sportswear the colour of 20p bouncies from that vending machine next to the crocodile hunter ride in Wood Green shopping Centre. We’ve visited them all. But just because my favourite bus route is the 153 as well, it doesn’t mean we’re mates, mate - I’m your support worker and you’re the client, or the service user, not patient – you’ve got no patience, neither have I. And I write it up in you daily report, like stage notes, or a score. At dusk we float plastic carriers around Arundel Square – transparent thin bags, very specific – you’ve got a non-verbal agreement with the nice greengrocer we walk past. He donates these deep sea creatures that suspend time in the breeze; precise as plankton. You are gently teaching me an extra sense (something humans had never imagined, except in approximations of their existing senses). You’re non verbal but physically articulate, and I have verbal diarrhoea but no spatial awareness. Who’s supporting who, I wonder? You’re the only person I feel comfortable with in silence.

Free tickets to a west end matinée of mamma Mia. You are very excited but are repeatedly shouting ‘look at that man’ at the stage, which is annoying the public, not least because it’s tautological. I explain that the word theatre sort of means ‘look at that man (or woman)’ and so it’s unnecessary to say it aloud while pointing at the actor. We are all looking at that man, except now most of the people are looking at you, with expressions imported from the Home Counties. Luckily you’re now obsessing over my Casio watch, which is more engaging than the engagement party on stage, we strike a silent deal for you to borrow the watch in return for not heckling. You up the stakes, and demand to borrow my shoes in return for not laughing in extra loud experimental ways, then you want the lanyard, and my keys, and my hoodie, my glasses. I am being slowly robbed in public by an eight year old to a soundtrack of The Winner Takes It All. We exit the theatre, with you dressed as me.

I am holding a big fishing net which the lifeguard has given me. I am deep in slightly brown water trying to find the fragments of what you did now that it’s broken up and dispersed. Everyone has to get out of Highbury pool except me and two eager nine year olds with goggles - valiant strangers who have volunteered to scour the deep end to guide me towards each piece (why are their parents OK with this?). I can categorise human waste at twenty feet now (must add that to my LinkedIn) and this number two would be number six on the Bristol Stool Chart – fluffy pieces with ragged edges. Bristol must be proud to be named after a stool chart. But this is Islington, dahling! Is that Boris Johnson’s wife leaping out the deep end? - this wellness treatment is new, she’s thinking. It said in your file that you don’t deliberately defecate in Highbury Pool anymore; I will update the file.

My hamstrings twinge, and a heap of fragile bodies flies into the air, tessellating like a cadburys selection box shaken up in transit – Crunchie, Twirl and Curly Whirly; affectionate terms for your range of impairments, or names of dance-moves flung around this trampoline? You get treated like porcelain usually, but now you’re flying saucers. Twirl, Twirl, CRUNCH. “Sorry was that your finger?! arms in, arms in!”. Pompeii figures re-cast in silly putty. And even if your legs worked the same as mine, why would you jump when you could lay there laughing at me, bouncing for hours. Outsourced legs like eyes to guide dogs, and I put the adore in Labrador. Keep bouncing. Because you know I can’t say no, when it makes you that happy - I’m like SpongeBob asking for his stolen ice cream back in that episode you made me watch eighteen times yesterday. “Let him have it” yells the sea cucumber inciting aggression”, “you can have it” beams the sponge, offering the ice cream. You’d walk all over me if you could. Springy serfdom, but you’re surfing.

You have invented a new sport. It involves storming into the local football team’s AstroTurf enclosure before I can stop you, for a one man pitch invasion and challenging the reluctantly obliging players to a clapping game as they try to resume play, inducing a rhythmic ritual which makes Asger Jorn’s surrealist 3-sided football match look pretty ordinary. But my supervisor says my only objective is to help you fit in with society, so that one day you can do normal stuff like queue for a pre-digested hotdog in Edmonton IKEA. Which I understand. And we will, but right now we’re busy collaborating on an aktionist live art performance… literally immersive theatre - you’re spitting and trickling fountains of liquid dough across the bin-bag clad arena of the lunch room while everyone else is at the zoo. You’re not fond of the zoo. In crowded places you have a tendency to slap strangers on the buttock, out of nowhere, while making the sound of an albino peacock (one of the centre’s sonic trends after a visit to Holland Park). Slapped strangers’ expressions a mixture of rage and guilt, as if not sure wether it’s you or them who’s transgressed a social boundary. On the bus I steer your wheelchair closer to that guy, the one with that Arsenal tattoo on his arm… the ‘nal’ bit of the word Arsenal hidden under his sleeve - just the arse showing. Yes him, the guy standing next to his pregnant girlfriend wearing a T-shirt which says “she’s eating for two, I’m drinking for three” on it. We’ve positioned ourselves near him, so that if you're overcome by the spontaneous desire to forcefully strike a member of the public at least it will castrate a deserving victim.

Back at the centre, she’s in her own world. Air-dancing to opera, in the sensory room. Suspended. I’m sliding the hoist, swinging her gently around the room, reading subtle but assertive facial instructions. Glowing lights reclaim limbs from palsy as weightless shadows - body finally freed from its chair as we float around serenely in this primary padded Royal Opera House. Tonight she takes the lead as Madame Butterfly… and this Madame Butterfly is wearing a Man United shirt.

We are baking a cake, it takes all day, it has to be perfect. You and I fill it with cream and decorate it really neatly. It must look the part. It needs a glacé cherry on the top and a sprinkling of icing sugar, it must look exactly like the one we saw on Extreme Bakes USA. The cake is ready. It looks perfect. Now, stick it back in the blender – we’ll need to liquidise it so I can feed you a slice through your inter-gastric tube. I drink my cake through a straw too for solidarity. You’re allowed to try a tiny taste on a teaspoon, it’s delicious! Next time we’ll have a go at that roller coaster shaped one.

Why here, of all places? - in the covent garden branch of the Crocs store, amongst all these foam shoes that were fashionable in 2004. Why here, with all these customer service assistants, when you’re wearing your baggy teenage shell-suit, surrounded by brightly coloured pairs of Crocs, and holding my hand? Why here, did you think it would be appropriate to get an erection? It said in your file that you don’t get erections in the Crocs store in Covent Garden anymore; I will update the file.

You’re very wise. You are explaining to me that according to the council’s Every Child Matters policy initiative which they summarise using the acronym SHEEP (Safe, Healthy, Enjoy/Achieve, Economic, Positive). I’m supposed to help you experience things that other teenagers your age are doing, towards your financial and emotional wellbeing. It’s the day of the 2011 London riots and you ask politely if I will take you to JD Sport on Holloway Rd so you can loot trainers, towards your financial and emotional wellbeing. You have heard that people have taken over the McDonalds and are serving themselves milkshakes. Doesn’t sound like much of a riot, sounds like work experience. Naturally, I oblige. Just kidding. You are very wise. Too wise.

You and I have shared interests. In my free time, I too like to YouTube binge seconds 41-50 of Beyonce’s If I Were a Boy - that bit where she puts her aviators on and walks out in a police uniform. Wobble-scratching the time bar. Repeat. That bit, where she walks out. And she puts the glasses on, down the steps of that Brooklyn brownstone. Cursor flex. Just five more minutes. We set a giant sand timer, the kind that doesn’t smash when it’s thrown across the room. And she puts the glasses on, walks out, glasses on, walks out, glasses, steps, cop car, reverse.

It’s what she would have wanted, I exclaim. Who? Asks the fountain security guard. Princess Diana. He hands me an empty monster munch packet someone has kindly donated - slimy pickled onion shroud for my hand which is dipping into the water to remove what would probably be a number three on the Bristol stool chart. It said in your file you don’t defecate in the Princess Diana memorial fountain anymore. I will update your file.

You have occupied the iconic portico at the entrance to Hampstead Heath’s stately home Kenwood House and won’t move until I chant twinkle twinkle little star again with you. The English heritage staff on the door know a bit too much about historic castle sieges and are treating it like a full scale invasion. As though twinkle twinkle posed the same architectural threat as London bridge is falling down. Twinkle twinkle. Sparking the nimby synapse in the house-price fixated brain of a passerby. Because, this is a little proletarian revolution before we go for ice cream. When I’m with you I feel powerful.